Ford Endeavour vs Toyota Fortuner — Which one to buy? - Harpreet Ford 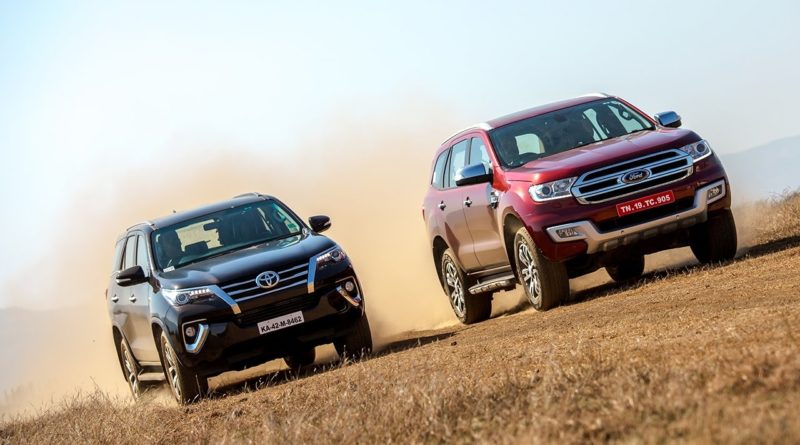 The Indian automobile market has a tremendous growing demand for SUV vehicles, with the growing demand. Big automobile giants aren’t letting these opportunities go out of hand. Having a SUV vehicle gives an individual a lot of confidence over the roads and can travel many places where other normal cars cannot. The competition remains tough between the two cars Toyota Fortuner or the Ford Endeavour.

Both of the cars have a long history behind them since the time they were launched in India. Toyota fortuner was launched by Toyota in 2009. Initially the Fortuner was sold with 4 different types’ models, which were of 2 petrol engines and 2 diesel engines. All of the variants were offered in RWD or 4WD configuration, with a 5-speed manual transmission and a 4 or 5-speed automatic transmission. Back In August 2012, the 2.5 L common-rail turbo diesel 2KD-FTV engine was upgraded to a better variable nozzle (VNT) turbocharger which was equipped in the 3.0 L common-rail turbo diesel 1KD-FTV since its release in 2005 which was made to increase power and torque almost about 60%, and also reducing fuel consumption up to 30%.

In the beginning, there was only one trim of the car sold in India, which is the 3.0 L 1KD-FTV I4 Common Rail Turbo Diesel engine 4×4 MT, with leather upholstery and climatronic as standard. But at the 2012 Indian Auto Expo, Toyota launched the car in 3.0 L 4×2 Manual and Automatic transmission. The top-of-the-range Fortuner 3.0 L 4×4 AT was introduced to the Indian market in January 2015  alongside with a 2.5 L 2KD-FTV I4 Common Rail Turbo Diesel engine with 5-speed manual and 5-speed automatic transmission. This 2.5 L variant was only available in 4×2 configuration.

Whereas witnessing this, ford also did was not very far behind with the successful launch of Ford endeavor. The Ford Everest, also known as the Ford Endeavour in the Indian market, is a mid-sized  (SUV) produced by Ford, and since 2003 over three generations of the car has been introduced into the market, every time with better features and technological advancements. The Everest is a five-door SUV variant of the Ford Ranger four-door pickup truck.

3. Third generation (2015–present): based on the Ford Ranger (T6), and designed in Australia, but built in Thailand, available from 2015.This model received a facelift in 2018 coinciding with the Ranger.

These ladder framed monsters will intimidate minions out of their manner within the town on the roads and won’t bat a single problem while conquering the difficult terrains.

With this, both of the cars have their latest models in the country with a massive demand for both of the vehicles. Now, the question is, Which one to buy?

The Toyota Fortuner sports the most present day SUV structure to its pack. The enchanting chrome accents and sharp rakish headlamps on the front and the smooth shoulder line that settles up before gathering with the C-column gives it particular strong vehicle energy.

While the Fortuner still looks crisp on the outside, present day insides have never been a strong point of the Japanese maker. The dim tan upholstery and wood accents have a specific outdated upmarket feel, yet the plain and simple design of everything gives you the unmistakable inclination that you are sitting in the most un-established lodge of the vehicle. Still there are a couple of more highlights on offer to enable the Fortuner to feel superior to Ford Endeavour.

Both front seats are controlled and every one of the four windows include auto up/down. It even gets an electric rear end tail-gate. Its six-speaker sound system is deserving of a quick update however and it’s additionally missing the practically standard Android Auto and Apple Car Play.

From the sheer sales that the Toyota Fortuner posts every month, the fact that the Fortuner inspires many is evident. Reliability, a solid service network and brand value are its primary pullers. It’s also the swankiest looking SUV around

In any case, in the comparison of the crisp looking Ford Endeavour, the new Fortuner loses a portion of its sheen. Another unexpected thing happened when we took a gander at the numbers – the Fortuner is likewise the littlest of the parcel.

It’s business numbers however they demonstrate that it’s still as attractive as it was on the very beginning. But, in between the both its additionally the most costly here at Rs 33.28 lakh.

On the other hand,

Additionally, progressing, the active noise cancellation in the car crosses out any disturbance for the ultimate comfort which gives it a particular edge as far as solace. Also, that makes it top the vibe great factor rivalry by a sound edge.

On the off chance that there’s one grievance we have, it will be the consideration and maintenance that will be required to keep those smooth insides spotless over the long haul.

The Ford Endeavour sports the biggest numbers in its segment. The big 3.2-litre, five-cylinder motor may not be the quickest, but is certainly is the most comfortable and convenient to drive. The slick-shifting gearbox, punchy torque band and light steering means that it’s surprisingly easy to maneuver around town and once you do get a move on, you are definitely going to appreciate that active noise cancelling feature in the car. It’s the quietest cabin by far in this comparison and this goes a long way in reducing the stress of driving it over long distances.

Being the most feature loaded and updated car of the lot and this 2019 model year update has given the car premium oomph on the inside, but has very minimal changes on the outside. It joins the ranks of Ford’s spot-the-differences “facelifts” that we’ve been witnessing of late.

Having that said, it’s still one of the nicest looking SUVs in our books and even though it does feature a lot of rounded edges, there is a certain butchness that gives it great road presence, and keeps it admirable at the same time. This 4×4 Titanium Plus will set you back Rs 32.97 lakh.

And finally we come to a conclusion of the mighty Ford Endeavour or the toyota Fortuner. The dreamiest of this bunch which is the Ford endeavour. It’s super comfy, quiet and easy to drive. It ticks a lot of luxury boxes and comes with massive road presence as well. It also inspires 99 per cent of the team that road tested it. Enough said.

Ford Endeavour is the vehicle which I will prefer to choose over the Toyota Fortuner because of the obvious stated reasons above. Evenhow, the Fortuner has its own customer base which will drive them for the final purchase.

To know more visit our Website or chat with us at Whatsapp now.